Trampolines on film: The stunts behind Hollywood movies.

We don’t usually want to think about the logistics and effort that are behind the crashes and smashes of the movies that thrill us; stunts have a special place behind the camera as a part of movie magic. We know that it isn’t real when a hero jumps from the hood of one car to another, or leaps from a burning building, but boy does it look real.

Launching a person high and landing them softly are crucial filmic stunts. Trampolines, therefore, hugely contribute to achieving these convincing and impressive, live-or-die performances. Adapting the techniques used by circus performers, and even magicians, stuntwomen and stuntmen are master illusionists.

Trampoline movie stunts – Why use trampolines?

Trampolines are essential for film stunts because of their versatility. They can be used to achieve greater jump heights and safer landings for performers, but they’re are also ideal to train those actors and stunt artists in body control. Mini-trampolines are usually used in on-location aerial stunts because they’re easy to both hide from the camera and transport between takes.

Filmmakers also use full-size trampolines to capture complicated aerial shots of the stunt performer when in front of a green-screen. With superhero films being so popular, feats of superhuman ability—like flying and air dodges—can only be achieved ‘in-camera’ with the help of the trusty trampoline and its cousins.

Our favourite basic stunt is the highfall because it looks so fun! Every time a hero leaps from a cliff or dives from an explosion, a dedicated stunt man is bouncing off a simple trampoline, perhaps being guided by invisible wires, and is landing on a giant air bag or foam pit. For more complicated falls and jumps, specially trained gymnasts are often called in because of their superior control over their bodies.

For some ‘falling’ or ‘leaping’ shots, filmmakers use more specialised break, pulley or vault systems. For example, in the Resident Evil films—where zombies were frequently blasted with shotguns—performers were tethered to a air ratchets and jerked backwards to simulate a massive force of a shotgun round. In Star Wars Episode I, when Obi-Wan Kenobi leaps many metres to continue his battle with Darth Maul, the actor was vaulted skywards using a hydraulic catapult, called an air ram. 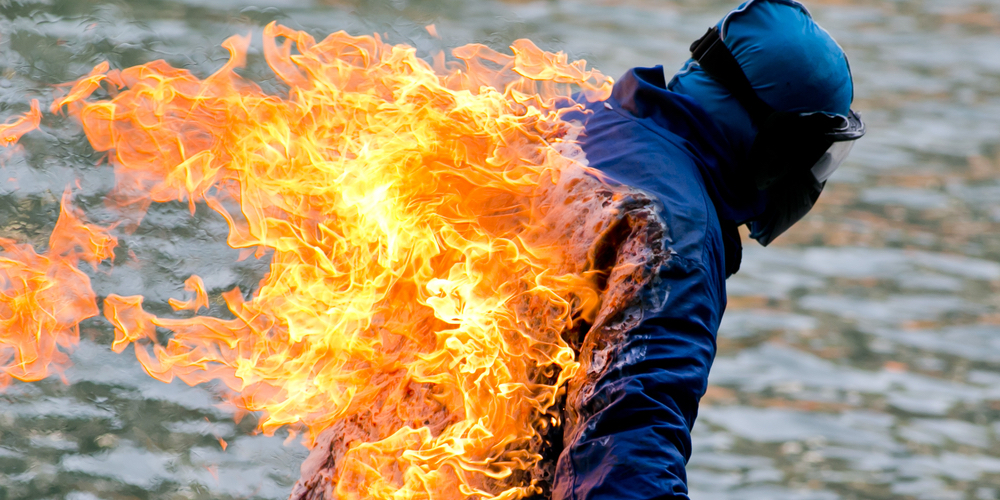 Fire-related stunts are some of the most dangerous in the business. When a scene calls for a character to be set alight or participate in an explosion, most of the stunt equipment brought in is protective. The performer is covered in special hydrogel—designed to delay heat transfer to the body—wears flame-resistant clothing and often a protective helmet, which can even be made to resemble the true actor’s face to assist with post-production!

However, we all know that fire can be unpredictable, and despite all the precautions, the very real flames can literally burn through these safety measures in no time. Whole teams of fire-fighting crews are usually on hand to douse the actor, and control the fire, between takes. While the results are impressive, we’re not sure that we’d like to be constantly set on fire all day; we'll stick to bouncing!

The stuntmen and stuntwomen in front of the camera aren't superhuman; they just have the right training and equipment. Have you watched the bonus features of your favourite movie and seen some amazing stunts performed with trampolines? Tell us about it! Here at Vuly, we do love to go behind-the-scenes.